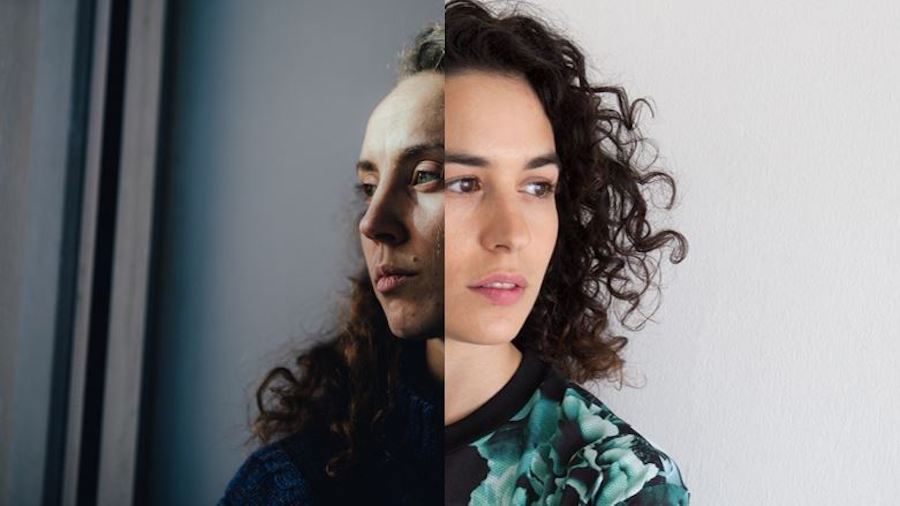 Possessing brings together artists Hadar Ahuvia and Shira Eviatar to Gibney’s Black Box Theater at 280 Broadway November 21-23, 2019. They collaboratively question their inherited connections to Israeli nation-state, asking “How do we move together?” We sat down with Ahuvia and Eviatar about their co-authorship and context to their work.

On their co-authorship of this work, the artists write:
“We have been visiting and hosting each other in New York/Lenapehoking (where Hadar is based) and in Israel/Palestine (where Shira is based). In each place, we have been observing, seeing, feeling, listening, moving. We are in an exacting process of cultivating cultural understandings, of investigating and moving beyond our histories. Our families’ cultures seem to be formed in relation to one another because of Israeli socio-politics, but we are not two sides of a coin, but we hold many narratives among many intertwining narratives of Jewish diaspora, that constituted Israel/Palestine, and that formed us.

Hadar’s work focuses on historical dances and their execution of Zionist ideology: the moments where she can trace how the execution of ongoing Nakba and misappropriated Arab Jewish dance entered the collective choreography that she practiced with her family in diaspora, that exists in her body, and is practiced by Zionist across the world still today.

Shira’s work observes bodies of knowledge in contemporary forms of tradition and celebration of Arabic-Jews in Israel. As being a descendent of immigrants from Morocco and Algiers, She started by observing herself, as a “study case”, as a person in society. Her work creates space for forms and content that are excluded from the dance scene, though they are a vital part of the culture. Her auto-ethnographic research seeks to articulate the values that are being practiced in cultural and familial gatherings, bringing them back to the studio, to establish Arab solidarity, to create a future movement. 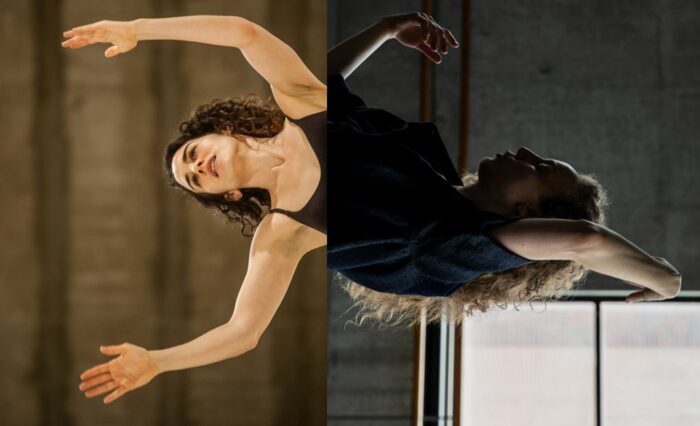 Together we ask, what is a Jewish dancing space, in a diaspora that includes Israel/Palestine?

How do we practice connection to place, belonging, acknowledgement, and hosting? We are lingering, suspending between history and the flesh, between narrative and fiber, between what is taught and what quivers. We are recognizing one in the other, and one another, we are moving alongside and intertwining, wandering amidst the multiplicity of placements and settlements, lingering in the present as a possibility for atonement.

As an artist residing in Israel, Shira has been awarded funding from the Department of Culture, funding that once given is not subject to political oversight by the state. Shira chooses to use these funds to further Arab Jewish visibility. Her work makes spaces that humanize Arabs and elevates shared Arab aesthetics as resistance to the Zionist narrative. This grows from an understanding that the Israeli nation-state was built on the oppression of all Arabs, Jews, and Palestinians. She builds this solidarity as a first step to furthering discussions in Israel about the occupation.

While Hadar does not live in Israel, as a dual citizen her right to return is enshrined by the state, while others are denied that access. The fact that she does not reside artist in Israel gives her the privilege to speak without fear of censorship. At the same time, she acknowledges that her ongoing work in the US In the US, her ability to work is supported by institutions whose wealth derives from structures that are built on centuries of enslavement, broken treaties and dispossession. She is working within her Jewish American and artistic context, to shift narratives around Israel/Palestine, to make vivid our power to end US support for Palestinain occupation, and move towards policies that ensure justice and peace for Israelis and Palestinians.

On a new way of crediting and acknowledging places where they are working:
Irrespective of the content of the work, we made decisions about how and where we would work, with the ethics of solidarity in mind. In Israel/Palestine we chose to work as much as possible in artist-run spaces. Our work was supported by Studio Catamon in Jerusalem/Al Quds, by a Rosh Pinah Residency in what was Al-Ja’una, and by Yasmeen Godder Studio in Yaffa. We were also supported by Seminar Hakibutzim in Ramat Aviv/Al-Shaykh Muwannis. In the US/Turtle Island, we were space grant recipients at the Harkness Dance Center at the 92 Y. We are honored to be included in Eva Yaa Asantewaa’s visionary, inaugural season at Gibney.

As we dream about the future of the work, we are committed to not performing our work at events that are sponsored by Israeli state or consular bodies. Still, this specific project of ours will always be complicit in some way with the ongoing violent occupations. It is our responsibility to do the work of repair, in our communities—in Israel/Palestine and the U.S/Turtle Island.

We resist the notion that our relationship is only based on Zionism. We are owning our power as Jewish, female artists striving to resist the reiteration of Zionist hierarchies and values. We hope to offer a new relationship, a new way of being within the politics we are holding.