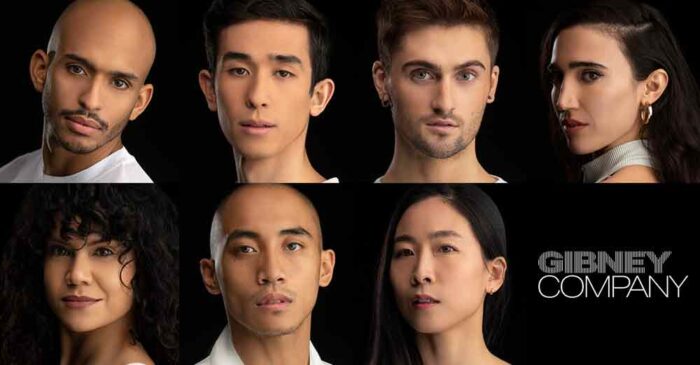 Alexander Anderson, a South Florida native, attended the Alexander W. Dreyfoos School of the Arts and went on to continue his training at The Juilliard School, where he received his Bachelor of Fine Arts Degree in Dance in 2014. While at Juilliard, his choreography received Choreographic Honors and was featured in the Peter Jay Sharp Theater from 2010-2014. He is a 2012 recipient of the Dizzy Feet Foundation Scholarship Award, a 2013 recipient of the Princess Grace Foundation Scholarship Award, as well as the Alexander Bay Moore Dance Award. He began his professional career dancing for Netherlands Dans Theater 2 and later joined Netherlands Dans Theater 1 as a company artist.

Jake Tribus received a BFA in Dance with a focus on Business and Film from the University of Southern California’s Glorya Kaufman School of Dance. Tribus has also trained at CC & Company Dance Complex in Raleigh, North Carolina, under the direction of Christy Curtis; as an apprentice at Next Generation Ballet in Tampa, Florida, under the direction of Peter Stark; and in intensives with Nederlands Dans Theater, Batsheva Gaga Technique, The Juilliard School, and Complexions Contemporary Ballet. Tribus has worked with Aszure Barton, William Forsythe, Travis Wall, Tessandra Chavez, Sonya Tayeh, Martha Nichols, Mandy Moore, Jason Parsons, Lauren Adams, and Jess Hendricks. Additional stage performances include Kirsten Russell’s Fell Only Once, “Newsies” tribute at the Fred and Adele Astaire Awards, Capezio’s 125th Anniversary Celebration, Youth America Grand Prix Gala, and the 2017 Emmy Awards. He has worked with artists including Janet Jackson and Lorde. Screen performances include: The Late Late Show with James Corden, the Dirty Dancing television remake, the Discover Los Angeles commercial for the LA Tourism and Convention Board, Taylor Swift’s Look What You Made Me Do music video, and the Backstreet Boys’ Chances music video. During his time at USC Kaufman, Tribus directed his own conceptual dance video titled Love to Change, collaborating with and utilizing the skills of film students at the USC School of Cinematic Arts. Tribus  continues to explore his passion for philanthropy, production, creation, and leadership through dance.

Marla Phelan’s career spans Contemporary Dance, Broadway, Immersive Theater, FIlm, TV, Commercial Campaigns, and Fashion. Marla received her BFA in dance from The Juilliard School. Phelan has worked with Akram Khan, Hofesh Shechter, and Maxine Doyle. She made her Broadway debut in Bartlett Sher’s Fiddler on the Roof and is currently the Associate Choreographer/ Assistant Director for the National Tour. Phelan joined acclaimed immersive theater company Punchdrunk in 2011 for their Off-Broadway debut of Sleep No More and their National Theater of London production of The Drowned Man: A Hollywood Fable.  Recently, Phelan performed in Dragon Spring Phoenix Rise as part of The Shed’s inaugural season and in the opera Ellen West for The Prototype Festival. On camera, Marla has danced in music videos Armor (Sara Bareilles) and Night by Night (Chromeo), in Comedy Central’s Alternatino, CBS’s The Late Show, specials for NBC and Netflix, the feature film The Kitchen, and in fashion campaigns for Desigual (dir. Jean Paul Goude/ choreo. Ryan Heffington) and H & M Studio. Phelan starred in and choreographed the short film Flow (SXSW), Cousin John (SXSW) and Lucid.  Phelan has choreographed and directed movement for Fischerspooner’s Top Brazil, Mazda’s CRX commercial, and campaigns for GAP, Reebok, Stuart Weitzman, Refinery29, New York Magazine and The New York Times.

Zui Gomez was born in the Dominican Republic and raised in Miami. She received her BFA in Dance from the Boston Conservatory where she performed many classics. Gomez has danced with Ballet Hispanico, Ballet Hispanico Dos, Collage Dance Collective, DanceNOW! Ensemble, ArmitageGone! Dance, RuddUR Dance Company, as well as Rosie Herrera Dance Theatre & Zest Collective. She has also worked alongside Jamar Roberts in his premiere ‘Veil’ in Miami. Has appeared on GlamourSpain magazine, DanceSpirit Magazine, modeled for Good HyouMan, and enthusiastically participated in fashion week in the past. Gomez recently appeared in Times Square for a campaign with Volunteers of America (#TheWarInside) where photos were taken by Nir Arieli and movement direction led by Omri Drumlevich. Go check out her fellowship program, CONFIDANZ (@confidanz), and ask her all about it. She’s an aspiring photographer, inspired videographer, believer of kindness, and advocates for eco-friendly everything. Rolling into her third year with Gibney Company and is thrilled to be performing on the stage once again with some new friends.

Pajarillaga is the associate director of Moving Forward Dallas, a non-profit dedicated to nurturing the thriving young artists in Dallas. He has appeared in GAP’s 2018 spring campaign “Experiment in Color” and in Apolla Performance Shocks’ campaign in 2017. He is the movement coach and choreographer for artist “BIG WILD”, Jackson. He has choreographed for NW Dance Project’s “In Good Company”, The Juilliard School’s senior showcase, the DREAMscape Gala, Booker T. Washington Ensemble, and Wanderlust dance project. Pajarillaga is the recipient of the “All County Performing Arts Awards” by the MCPS Arts Superintendent and the “All States Dance Award” at the Goucher College Dance Festival in 2011 and 2012.

In addition, Shiau was a recipient of Chicago Dancemaker Forum Greenhouse Artist in 2019, New Choreographer Project in Taipei, Taiwan in 2019, Dance Magazine’s “25 To Watch” in 2018, Honorable Mention for Jadin Wong Award for Emerging Asian American Dancer in 2014, and Reverb Dance Festival Dancer Award in 2014.

To promote everyone’s health and safety, we are requiring that all eligible audience members provide proof of a COVID-19 booster as of February 1, 2022.

Booster eligibility as defined by the CDC can be found here. If you are not yet eligible, we still require full vaccination, meaning two (2) weeks have passed since your second shot of a two-dose vaccine or your single shot of a one-dose vaccine. A recent COVID-19 infection does not exempt you from the booster requirement.

Upon arrival to Gibney Center for a performance, audience members will need their vaccination proof (including evidence of a booster, if eligible), a photo ID, and their tickets. Children under 17 will not need a photo ID, as long as they’re accompanied by an adult. Children under five will not be admitted.

Please email covidsafety@gibneydance.org with any questions. Thank you.