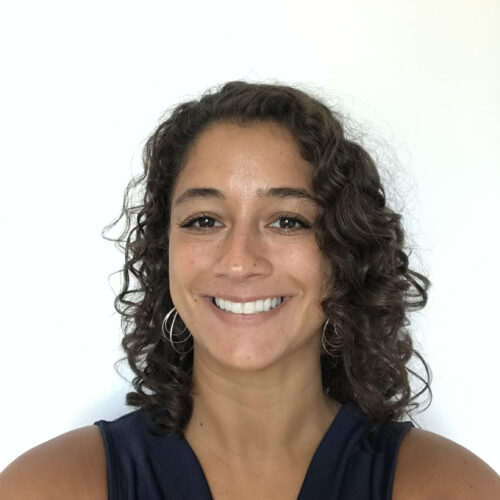 Allegra Romita (MA, CMA, EdM, RYT) is co-creator of Functional Awareness: Anatomy in Action®. She is a collaborator in curriculum design for Functional Awareness for Dancers and primary curriculum designer of Functional Awareness for Yoga. Allegra’s collaborative work with Nancy Romita includes publishing Functional Awareness: Anatomy in Action for Dancers and Functional Awareness and Yoga: An Anatomical Guide to the Body in Reflective Practice (Oxford University Press). She has presented workshops and keynote speeches on the Functional Awareness approach worldwide from New York City to San Diego, from Helsinki to Hong Kong. She has presented sessions at the American College Dance Association (ACDA), the National Dance Education Organization (NDEO), and the International Association for Dance Medicine and Science (IADMS) and as a keynote speaker at the Somatics and Dance Conference. Allegra graduated from the University of Michigan with honors with a BFA in Dance and a minor in Movement Science. She additionally received her MA in Dance Education from NYU Steinhardt and EdM in Motor Learning and Control from Teachers College, Columbia University. Allegra serves as the Program Administrator and as Adjunct Faculty for NYU Steinhardt’s Dance Education program. She was on faculty in the dance department at Towson University in 2017 and has taught as a guest artist at TU over the last ten years. Since 2011, Allegra has been performing regionally and nationally with Sydnie L. Mosley Dances and is the Artistic Visioning Partner with the company. Allegra’s passion for somatic investigation led her to certification (CMA) in Laban Movement Analysis through the Laban/Bartenieff Institute of Movement Studies. She completed the certificate in dance injury rehabilitation from West Side Dance Physical Therapy in New York City. In addition, she trained in traditional Thai Massage Sacred Bodywork with Ananda Apfelbaum. Allegra received her 200-hour teacher training certification in Vinyasa Yoga with Sid McNairy in Baltimore, MD, in 2008. Allegra currently teaches at Brooklyn Yoga Project and Heatwise Yoga in Brooklyn, NY, and co-teaches in the teacher training programs at both studios.

Functional Awareness® (FA) is an approach to embodied anatomy through reflective practice to enhance our understanding of movement function, facilitate ease in body action, and improve movement skills. FA® Movement Practice integrates the principles and of Functional Awareness® Anatomy in Action & other somatic movement practices with the study of yoga and dance techniques.