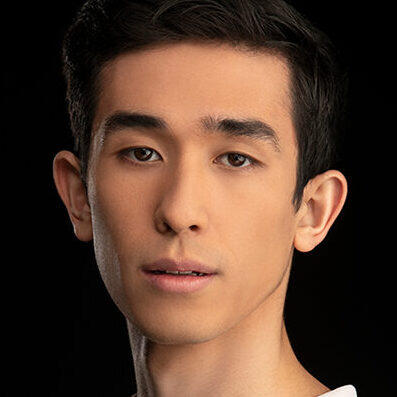 Artistic Associate
Jesse Obremski (he/him), a native New Yorker, Japanese-American, graduated from LaGuardia High School and The Juilliard School, under the direction of Lawrence Rhodes, with additional development at The School at Jacob’s Pillow with multiple years at The Ailey School, Earl Mosley’s Institute of the Arts, and Springboard Danse Montréal. Obremski, an Eagle Scout Rank recipient, Asian American Arts Alliance Jadin Wong Dance Awardee (2016), Interview En Lair’s “Dancer to Watch” (2017), and Dance Magazine’s (March 2019) Dancer “On The Rise” has performed with Earl Mosley’s Diversity of Dance, Brian Brooks Moving Company, Peter Stathas Dance, Kate Weare Company, Gallim Dance, and more, as a company member with Lar Lubovitch Dance Company, Buglisi Dance Theatre, WHITE WAVE, and a soloist and principal artist with The Limón Dance Company. Obremski has had the honor to perform for the Obama family at the inaugural White House Dance Series as well as for the Olympic recognized FINA World Tournament 2019 in South Korea. Obremski was also selected by Jacob’s Pillow and Adam Weinert for a restaging of Ted Shawn’s “Dance of the Ages” in 2018.
Obremski has taught nationally and internationally at The University of Hawaii at Manoa, Montclair State University, The University of Wyoming, Brigham Young University, Chosun University, Rambert Home Studio, LaGuardia Arts High School, Ballet Hispanicó, Gibney, MOVE|NYC|, and others and is on faculty for The Limón Foundation and Earl Mosley’s Diversity of Dance. Obremski has assisted in the staging of José Limón’s “Missa Brevis” at The Juilliard School from 2015-2018 as well as staged Limón’s solo “Chaconne” on MOVE|NYC| in 2018 and The University of Wyoming in 2019.
Among his 35+ works, Obremski’s choreography has been presented nationally and internationally at venues such as The New Prague Dance Festival, Detroit Dance City Festival, Battery Dance Festival, DUMBO Dance Festival (recipient of the DDF 2019 Choreographic Award), The Juilliard School’s Choreographic Honors Showcase, Gibney, The Ailey Citigroup Theater, Arts on Site, and he has been commissioned for new creations by The University of Wyoming, Hofstra University, Fort Hamilton Joffrey Academy, MOVE|NYC|, Utah Valley University, and repeatedly by Diversity of Dance, Sacred Heart University, and Brigham Young University.
Obremski founded his company, Obremski/Works, in 2018 as another choreographic outlet that includes an emphasis on dance films. In 2019, his dance film “No Words” was selected and presented by HBO at Lincoln Center through The Dance Films Associations. Other creations and dance films with Obremski/Works have been showcased in international spaces such as Malaysia, Japan, Canada, and Mexico. Obremski also proudly serves on the Board of Earl Mosley’s Diversity of Dance and the Executive Committee of the Junior Committee for Dance/NYC.
Obremski, through Gibney Company’s Moving Toward Justice Fellowship, is the founder and director of OUR PATHS, a cultural hub celebrating empathy through the lens of WHY through video and written interviews, podcasts, and professional development workshops.
Website: www.jesseobremski.com
Instagram: @Jesse_Obremski
Obremski joined Gibney Company in 2018 as a Guest Artist and has been a full-time Artistic Associate since 2019.