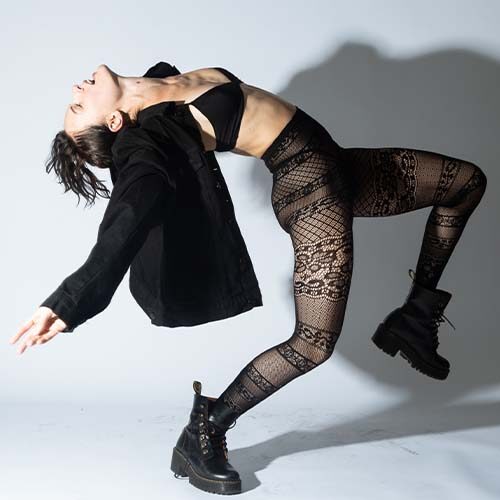 Thryn Saxon is a dancer, choreographer and teacher from Miami, FL. Saxon’s work has been performed at venues across NYC such as The Craft, GreenSpace, Gelsey Kirkland ArtsCenter and The Actor’s Fund Theater. Saxon has also had the privilege of teaching at the Cameron Dance Center in FL, DanceWave ASDI Summer Intensive, Connecticut College, Gibney Dance Center and Peridance Capezio Center. As a dancer Saxon has performed with Bill T. Jones/Arnie Zane Dance Company, John Zullo, Julia Ehrstrand, Rosie DeAngelo, TYKE Dance, SpacesOfFontana and is also currently a performer at Sleep No More and dancer with Kate Weare Company with whom she has toured nationally and abroad. Saxon’s debut dance film, “all of her”, was an official selection for the 2018 LA Dance Shorts Film Festival, The MarDel Presents: Dance on Film Festival (nominated for Best Choreography), SPARK Dance Film Festival and the ARTS TRIANGLE Dance Film Festival. Saxon was selected as one of 8 resident choreographers to participate in the Mare Nostrum Elements: Emerging Choreographer Series in 2019 and as one of the artists in residency at The Church in Mount Vision, NY for their Summer 2019 season. Saxon has been featured in interviews for DanceSpirit digital magazine and {DIYdancer} Magazine.

Saxon received her 400 hour Mat and Reformer Pilates Certification from Balanced Pilates in NYC and shortly after began teaching private sessions at E by Equinox in the Upper East Side. Since leaving E in 2019 Saxon has become an Associate Instructor at PIVOT Pilates and Restorative Exercise where she offers hour long private sessions based in Contemporary Pilates with principles of Yoga, Dance and Somatic Awareness integrated throughout. To find out more about Thryn and her work and to schedule a private session with her visit.

Inspired by her work with Kate Weare and Sleep No More Thryn Saxon’s classes are focused on
freedom of expression, detail, choice making and curiosity. Starting with a somatic based warm
up the class will move into a series of structured improvisations across the floor, followed by a
short center combo to find balance and release and finally finishing up with a large movement
phrase that combines rigor and specificity while incorporating all the elements from class.
Saxon’s classes are inspired by what she’s interested in learning and the concepts currently
being explored in her choreography. At this moment those concepts include, catch and release,
isolation and articulation and gut-initiated movement.