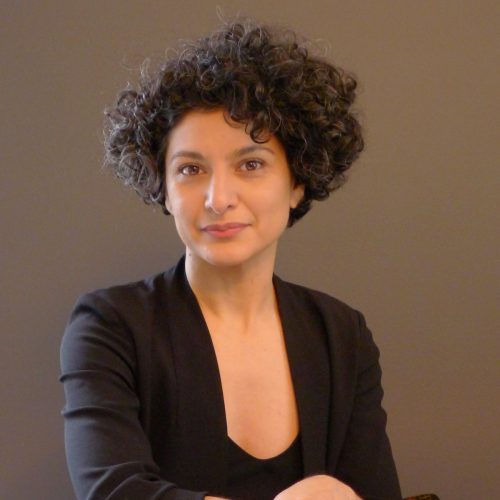 Kayhan Irani is an Emmy-award winning writer, a performer, and a Theater of the Oppressed trainer. She creates art to build community, offer spaces for healing, and to engage audiences in social justice issues. Kayhan was one of ten U.S. artists named by President Obama’s White House as a 2016 White House Champion of Change for her storytelling work.  She is currently working on a new one-woman show, There is a Portal, which asks: Can the story of an Iranian-Indian immigrant offer a space of healing for all Americans?

Her previous one-woman show, We’ve Come Undone toured nationally and internationally, telling stories of Arab, South Asian and Muslim-American women in the wake of 9/11. She was a Fulbright-Nehru Senior Researcher in 2012-2013 studying Parsi embroidery for her play, Tree of Seeds. Kayhan has trained hundreds of groups in Theater of the Oppressed and participatory storytelling tools over the years, both nationally and overseas, in Afghanistan, India, and Iraq. Clients include NGOs, government agencies, and community organizations interested in using in story-based strategies for engagement and education.

Kayhan’s work has been supported by the BBC World Service Trust, The U.S. Environmental Protection Agency, Bronx Council for the Arts, the New York Foundation for the Arts, The NYC Mayor’s Office of Media and Entertainment, The National Parks Service, and the American Society for Muslim Advancement. Her work has been written about in such publications as The New York Times, Race Forward Magazine, the N.Y. Daily News, and The Washington Report on Middle East Affairs.