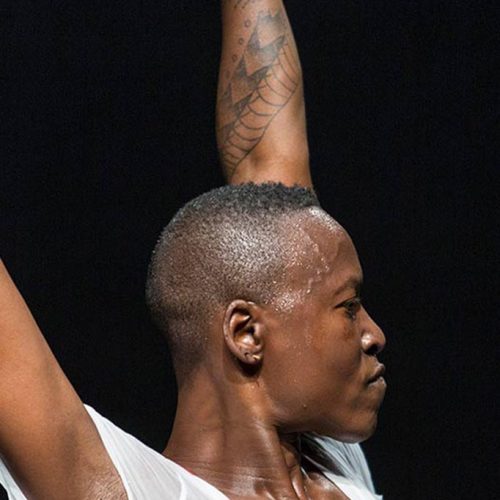 In partnership with JACK

Born in Mutare, Zimbabwe and based in New York City, Nora Chipaumire challenges and embraces stereotypes of Africa and the black performing body, art and aesthetic. She is a graduate of the University of Zimbabwe’s School of Law and holds a M.A. in Dance and M.F.A. in Choreography & Performance from Mills College. She has studied dance in Africa, Cuba, Jamaica and the U.S. and has performed internationally in France, Italy, Japan, Senegal, Zimbabwe and many others.  Chipaumire is currently developing a new work titled #PUNK 100%POP *NIGGA, commissioned by Lincoln Center for the Performing Arts with the support of BAM, Miami Light Project, ICA Live Art Festival (Cape Town), University of Richmond and Crossing the Line Festival/French Institute Alliance Française. Chipaumire most recently received the Trisha Mckenzie Memorial Award for her impact on the dance community in Zimbabwe. She is also a 2016 Foundation for Contemporary Arts grant recipient and a 2015 Doris Duke Artist. She was awarded the 2012 Alpert Award in the Arts and has been a Hodder Fellow at Princeton University, a United States Artist Ford Fellow, and a three-time MANCC Choreographic Fellow, and she is currently a fellow at The Institute for Creative Arts at University of Cape Town. Chipaumire is a three-time New York Dance and Performance (a.k.a. “Bessie”) Awardee.